You guys. I had a dark ugly secret deep within my home. It was called our utility room. 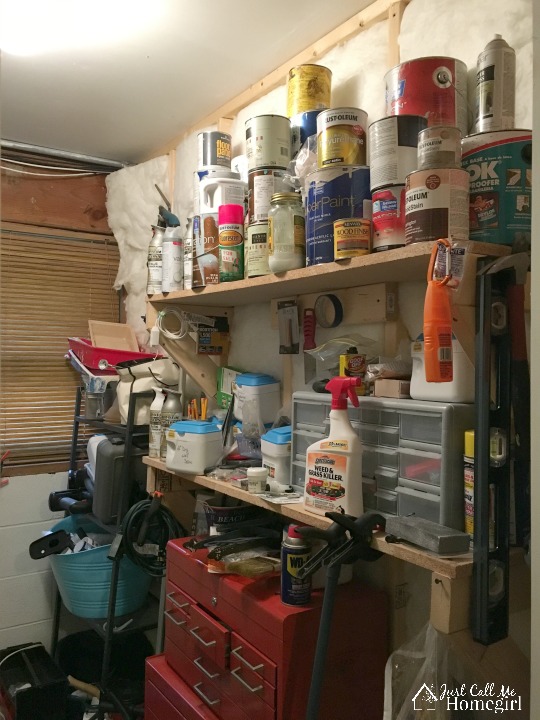 We created this room when we converted our garage. Since we were not going to have a garage anymore I thought it would be functional to hold our household tools paint anything else.

Well that anything else ended up being just a bunch of crap I would throw in there when I was done with a project. 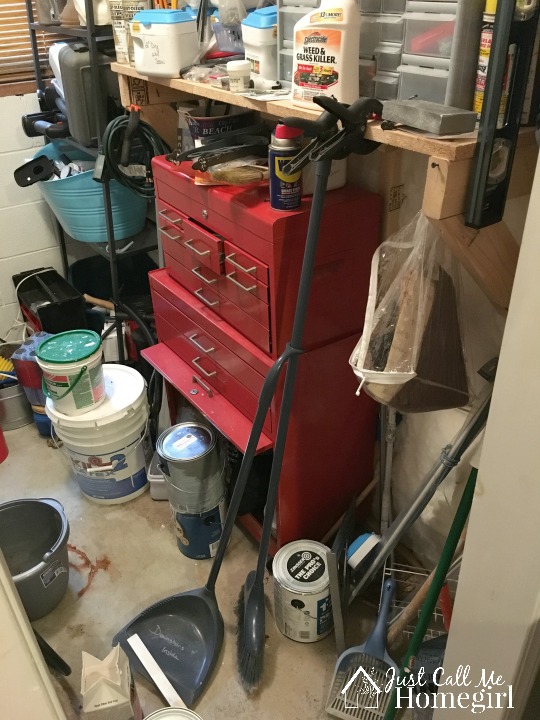 I had two shelves in there but after a while the shelves weren’t functional, I was wasting a lot of overhead space and they weren’t long enough. 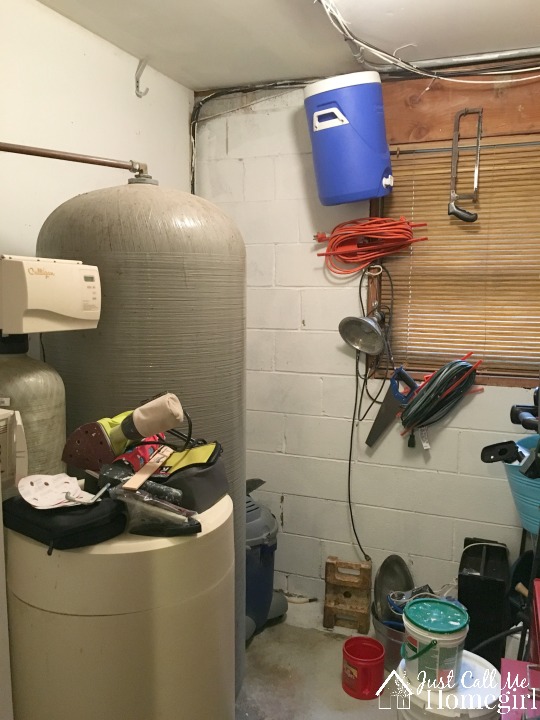 Since this room is just a utility room and I’m not having my morning cup of coffee in there, I wanted to make it over functionally for the least amount of money.

So that’s exactly what I did.

I took down the two shelves and I actually put them back up, only higher but low enough to hold 2 stacked paint cans between the shelf and the ceiling. I used brackets I already had so they cost me $0 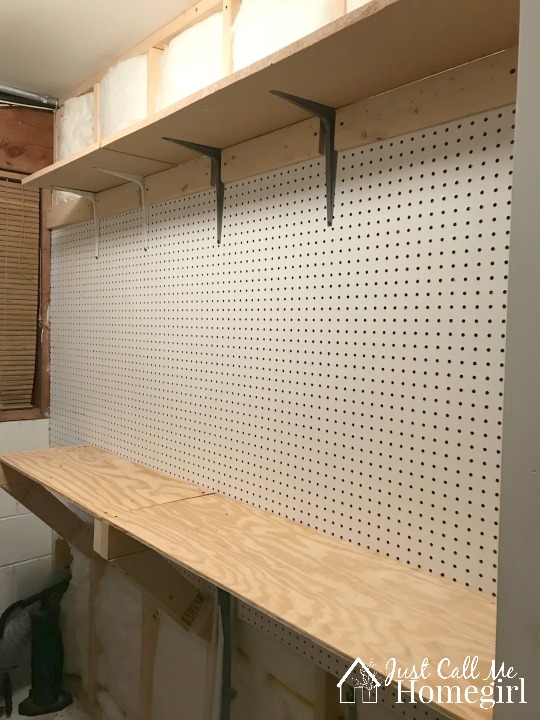 For tools and things I use regularly, I decided I needed a pegboard. I love the one I have in my office so I had to have one in here. The pegboard was I think around $17 at Lowe’s. I picked up a ton of used and new pegboard hooks from our local Restore for 50 cents a package! So I’m at about $20 right now.

I then took the old brackets that were holding up the old shelves and created a long shelf using scrap plywood I had in the shed. So $0! 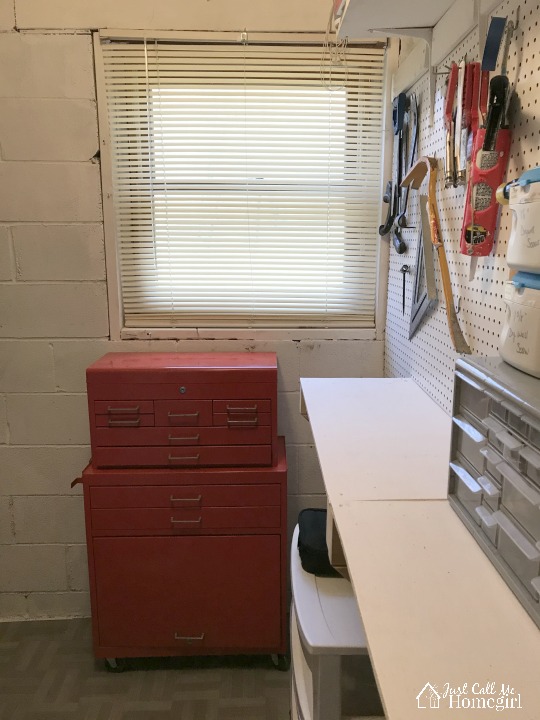 I painted everything white, with paint I already had and switched out the ugly brown shade that was there when we moved in, to a white one that was in our guest room and just put up curtains in the guest room. Score again $0 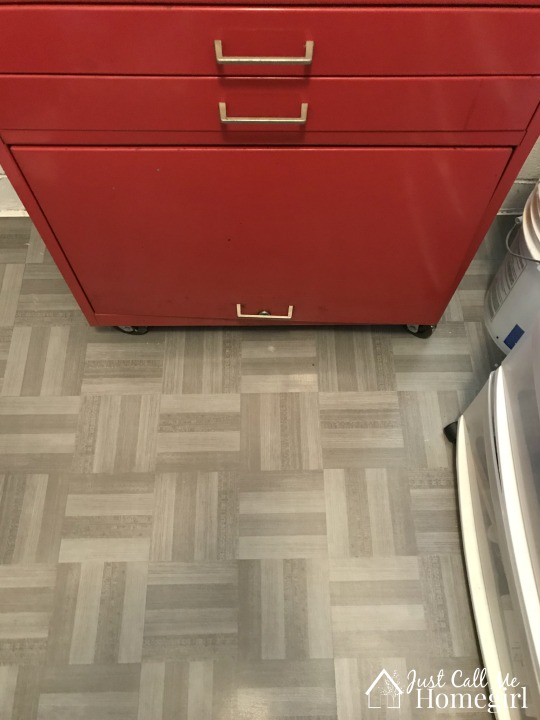 The next thing I actually did spend money on was vinyl peel and stick tiles. I wanted something that looked a little cleaner instead of the concrete. So I basically picked the cheapest ones on Amazon. They were about $9 per box of 20 and I used less than 2.

Now since they are the cheapest they probably won’t last long, but it’s not like there is a lot of traffic in there any way! Plus I have extra tiles if I need them.

I got rid of a bunch of stuff and organized the rest. 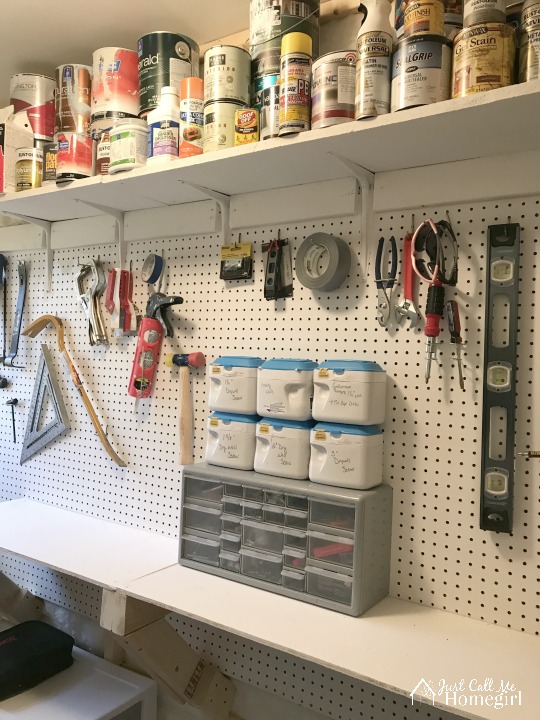 How great does it look now! Not magazine worthy but hey, it’s a utility room and it’s functional and I am happy.

Do you have a dark hidden secret in your home? Let me know in the comments!

How are the peel and stick tiles holding up? I like them and need some for a similar situation. But I see they only received 3 out of 5 stars on Amazon. Just wondering if you are satisfied with them.

So far they're fine. It has only been a week or so. I saw the reviews too but one literally said great for a room you don't use much. Which is basically what it is. We are really going in there to grab a tool or put salt in the tank. I would not recommend them for a well used room.

Hey Homegirl! I think your area looks much better and cleaner! I love the peg boards! They come in handy and make it easier to find your tools. We have an area called the "Dungeon" which is really our basement but are planning to turn it into our workshop! I had to check out the rings that you made. We make jewelry and plan to sell in the future! The brown rock I believe is an agate. They are beautiful in their colorings. We also hunt for rocks and are known as rockhounds. Well, this rockhound hopes that her area will be at least this neat! Good luck on your future projects. I look forward to seeing them!