For the last couple of years we have been flying to Florida to visit with my parents who stay for a couple of months in the winter.

Our son was 1.5 the first time we went and he was an excellent traveler. He was really interested in everything about the airplane.

The second time was the same. He was 2.5 years old and just wanted to look out the window or watch the iPad.

This time was completely different. Not because of him but now we threw a 9 month old in the mix, which meant more equipment, more luggage, and we had to rent a car since we couldn’t all fit in my parents car, which meant car seats. 2 of them.

Getting there was brutal. Not because of the kids, they were awesome. It was more of the logistics.

I definitely made some mistakes this time around and I think I figured some things out that I will do differently. 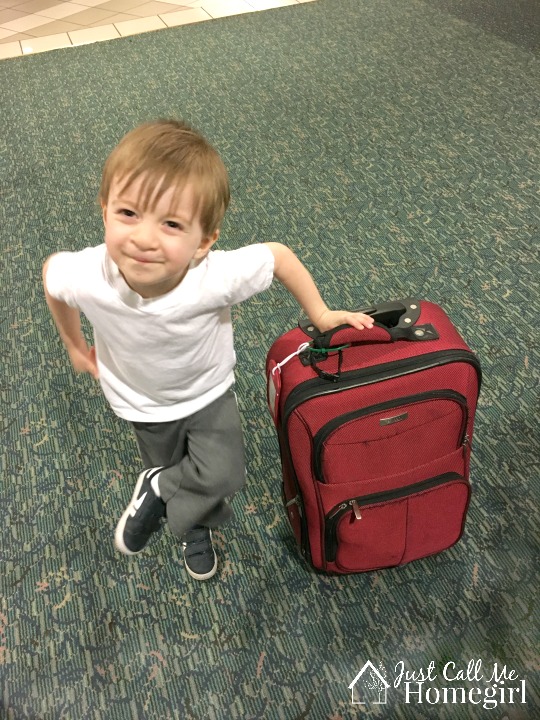 Tips for Flying with Young Children

Have your Spouse or Traveling Partner Drop you and the Kids off Curbside:

Depending on your airport I wish this is what we would have done. We fly out of JFK which is a large airport. We parked in long term parking, then had to gather 2 car seats, 1 large luggage, one small carry on and two personal bags, plus the stroller and the kids. We had to jump on the Air Tran to our gate, once we got off the Air Tran we literally had to walk a mile to get to check in.

The luggage was falling off the cart, the baby was crying. It wasn’t a pretty site. Next time I’ll have my husband drop me off then he can go park the car. Oh, it was also raining.

Did I mention we got there an hour and a half before our flight but since we had to load up and take the Air Tran, and walk forever by the time we got to check in, check in was almost closed for our flight!

To make it worse while we were in line for security…which was really slow moving I realized our flight was already boarding. Of course I told the TSA but they didn’t care. So we were waiting in line and then the X-ray machine in the line next broke. They then told all those people to go in our line in front of us! Thankfully some nice people let us go ahead of them but of course my personal bags got pulled because I had water in them for bottles and they had to test it to make sure it could go through.

Needless to say we were literally running to our flight. NEVER AGAIN. I don’t care if we leave 4 hours early I don’t plan on having to run with a 3 year old and a 9 month old again.

Rent Carseats When You Get There:

This was my plan all along until I called to see how much an infant seat and toddler seat would be and they told me $130 for the week. Well that seemed like too much when you can check them at check in or at the gate for free.

Uh, well my sons car seat is heavy and large so when I put it in the car seat bag it was huge. We decided to check it at check in because we didn’t feel like lugging it to the gate. We checked the infant seat at the gate just to see the gentleman who took it throw it down the ramp. Even when we picked up our sons car seat at baggage claim the bag was ripped and beat up. I can’t imagine how they handled it.

So I would either take a cheap smaller car seat or just rent them when you get there. We’ll rent them.

If you’re able wear the smaller child and sit the other in a stroller:

On the way there I had the baby in the stroller and my son was walking. But since we were late we were running and he was tired and it we just had to worry more about him in the sea of people. Or if you have a double stroller use it. We have one, but it’s a sit and stand and my son won’t stand. So it’s useless.

I wore the baby and put him in the stroller on the way back. So much easier! 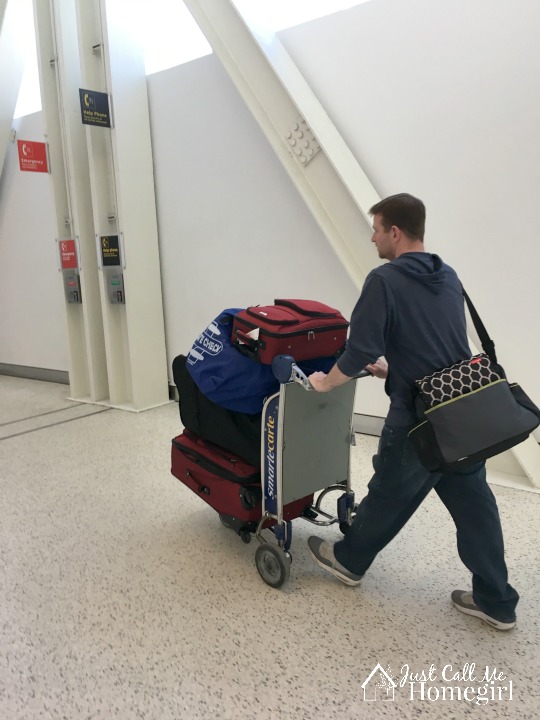 Use a luggage cart:

There was a luggage cart sitting next to our car when we parked, but my husband just threw the stuff on since I was already walking with the kids to the shuttle. He did a pretty poor job and things were falling off.

When we arrived we had to rent our car etc and we didn’t have a cart. It was horrible. We were literally walking around the parking garage with everything looking for our rental car! So on the way back home. We put $6 in the machine (I packed it this time) and we got our cart.

For the airplane, don’t overpack:

We had two personal bags and we went down to only one on the way back. I packed incase of every scenario. But the kids were great. The baby was content with a package of wipes to play with and my son was happy watching basketball on the tv.

This was our experience and we learned so much from it. Next year when we go back I think we will be master travelers. Or so I hope.

What tips do you have for flying with children?